One of the most important Japanese confections, used in various dishes and ceremonies, is mochi. This rice cake can be eaten just like that, but is often prepared with a filling (daifuku). Sometimes mochi is grilled or even used in savory dishes. Mochi plays a big role in the Japanese New Year.

I remember tasting mochi many years ago, when someone brought them for me from Japan. I instantly loved this dessert, with its strange consistency and its subtile sweetness. I never saw it anywhere anymore, until I recently rediscovered mochi in New York, where many Asian bakeries are selling them. I fell in love with mochi all over again. I was very curious to find out how to make mochi, and it turns out; it’s not that hard!

I’ve searched and looked through dozens of recipes online and found all kinds of recipes with different proportions. The traditional way of making mochi involves steaming the glutinous rice, then pounding it (this takes two people) with a hammer. Because I did not have a hammer around, I decided to go for a more simple way of making it, using glutinous rice powder (mochiko) and water, then steaming it in the microwave. For the filling I choose to make anko, which is a sweet bean paste often used as a mochi-filling! 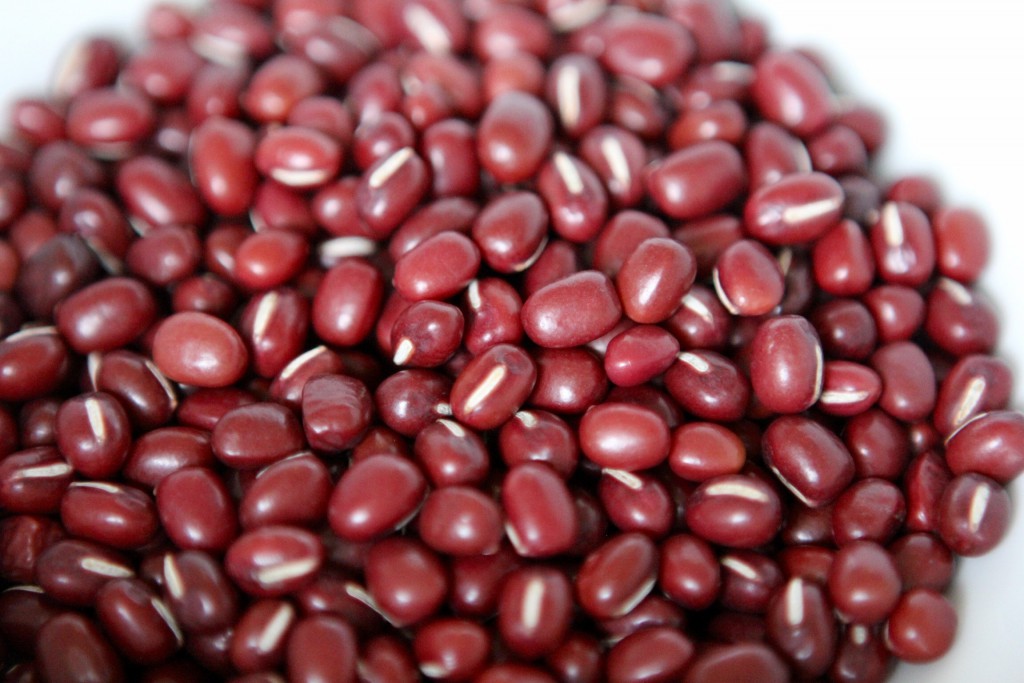 Note: canned beans would be an easy option, but as they usually contain loads of salt, you won’t get a very tasty anko out of it.

Cook the beans in about 1-2 hours, until they are easily mashable. Drain the water but leave about ½ cup water inside, so that the beans still have a little layer of water.. Add the sugar and the salt and mash everything together until smooth. If it is still very liquid, let it simmer on the stove until you get a thicker consistency. You want to make balls out of it eventually. Just keep in mind that the mixture will thicken quite a lot once cooled down! 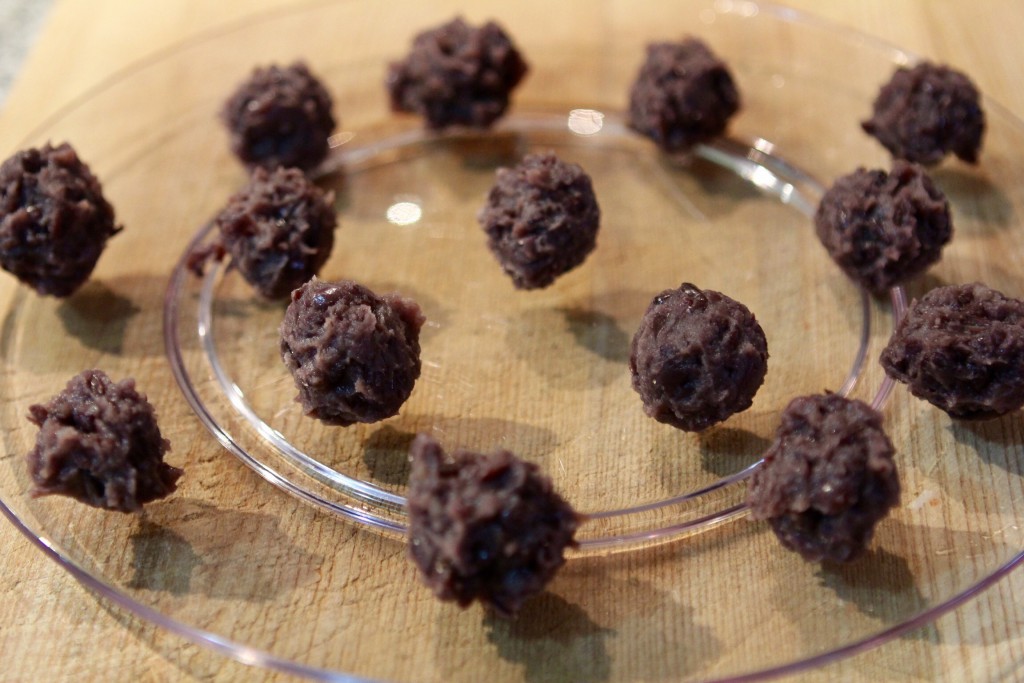 When you have a good, thick bean paste, turn of the heat and let the anko cool down. Now form little balls of it, you can probably get about 16 out of this. Refrigerate them and go to step 2: making mochi!

Note about the ingredients: only glutenous rice powder will work, “normal” rice powder will not give you the same texture. Glutenous rice does not contain any gluten but is named like this because of its sticky consistency (due to a very low amylose content). In terms of sugar you can add as much or as little as you want. Most recipes put the same amount of sugar as rice flour, I like it a little less sweet. You could even add less sugar, especially if your filling is already very sweet. For coloring you can use any (synthetic) coloring you want. I used two teaspoons of matcha (green tea powder), which is often used in mochi and vaguely gives it a tea flavor. For the pink mochi I made another batch and used a teaspoon of lemonade sprinklers (basically artificially pink sugar).

Take a microwave safe bowl, mix the rice flour, water, sugar and coloring together and stir with a spatula until you obtain a smooth liquid. Cover the bowl with plastic foil and microwave for 1 minute on highest setting. Take the bowl, stir through the ‘dough’ with a spatula and put it back in the microwave for 1 minute. By now your mochi should be done, but if you still some liquid parts or if it’s not homogeneous, stir it through again and put it back in the microwave for another minute. 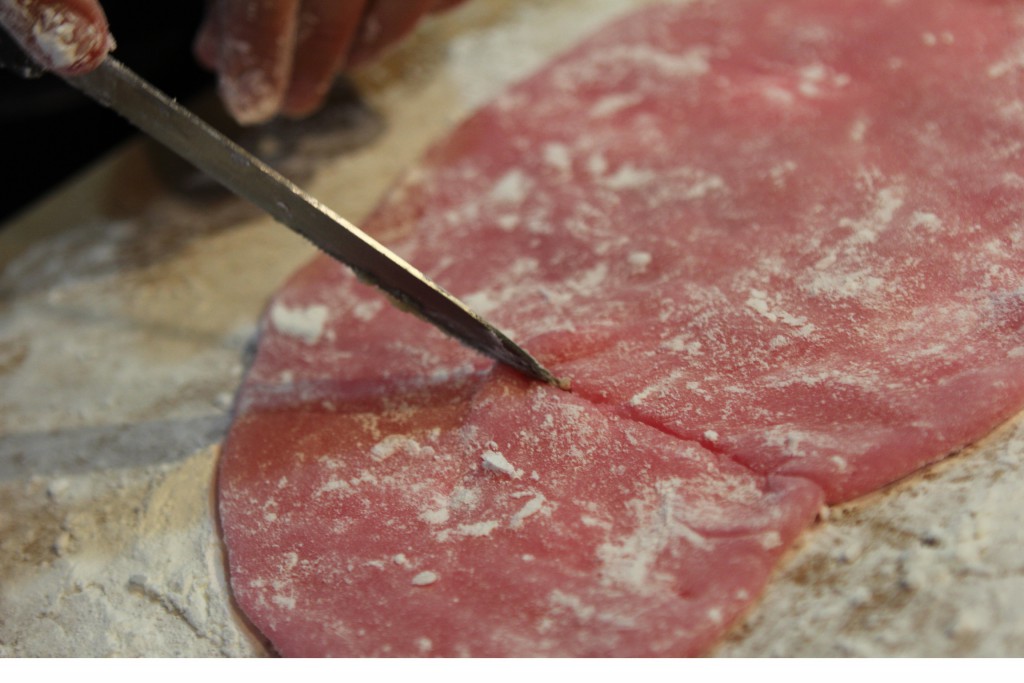 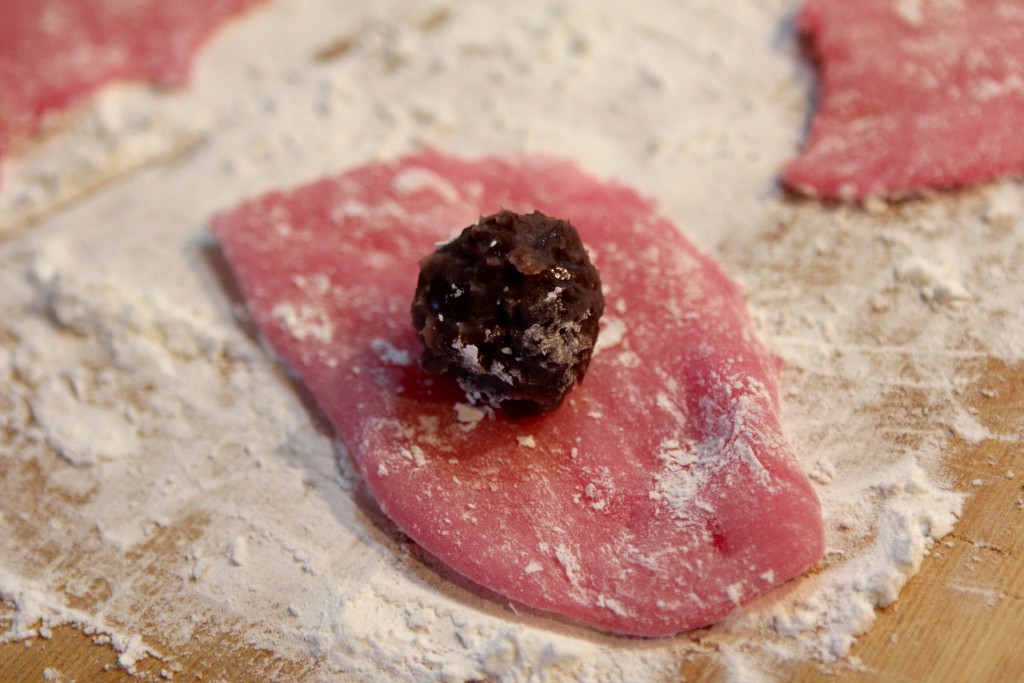 Once the mochi is done it should have a gummy/gelly consistency and be glazy. Now cover your work surface with corn starch and put the hot mochi (careful!) on the tray, using a spoon. Dust your hands with corn starch and spread the mochi with your hands, stretching it into cookie-thickness. Cut into 8 even pieces. Put a piece of anko in each piece and fold the mochi around it, forming little balls. This endresult is called daifuku. Wet the top of the daifuku with a cooking brush and sprinkle some coconut flakes over it for an even prettier (and tastier) result. 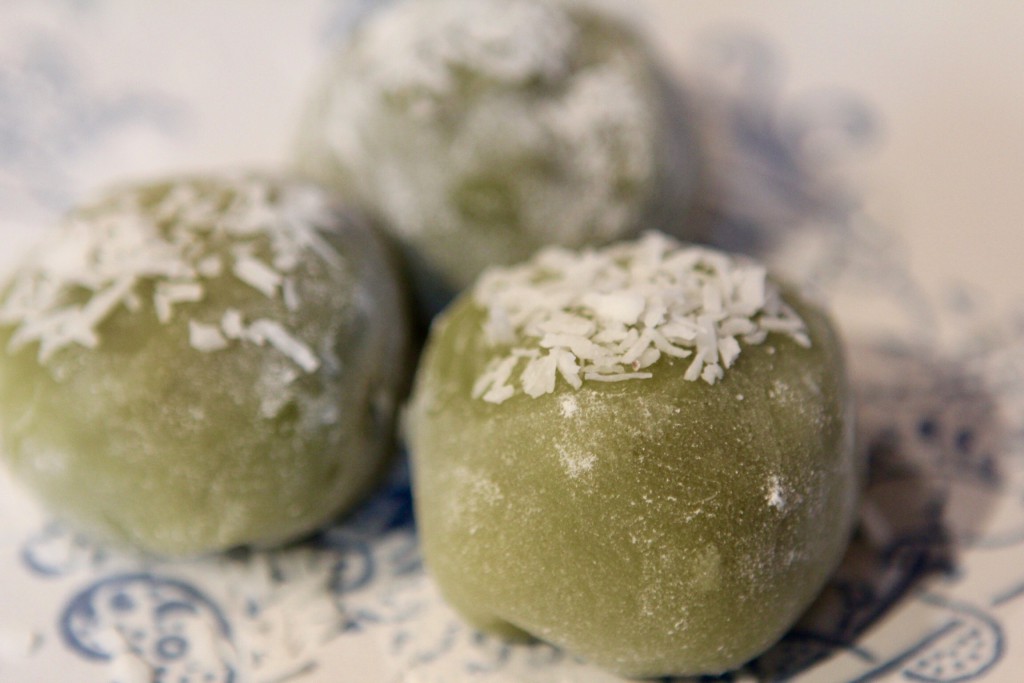 You can keep the daifuku outside of the fridge, wrapped in plastic foil or in a container, for about 2 days.