Discovering a place by its food is always a good idea. Of course I spent the last week trying local dishes and drinks, and if there’s one thing I discovered it is that sugar is very prominent in the Canadian diet.

Tim Hortons
Tim Hortons is the Starbucks of Canada. Even though you can find Starbucks is here as well, Tim Hortons is more popular and widespread. I heard many good things about the donuts at Tim Hortons, so on our first day in Canada JP and I sprinted over there and shared a maple syrup donut and some salted caramel Timbits (which are supposed to represent the cores, or the holes, of the donuts). It tasted great and totally matched my expectations, especially the Timbits. The coffee was so-so and they didn’t serve soy-milk, which was a minus for me. Although I enjoyed the sweetness of the donuts on the moment self, the sugar- and grease-overload kicked in half an hour later and I didn’t have appetite anymore for a whole day. Mind you; the minimum amount of Timbits you have to order is 10 (!) and the donuts are quite big. I felt so nauseous that I swore I would never eat a donut in my life ever again. All I craved was salad and raw vegetables, something I don’t crave so often. Now a week later I have to say that the thought of a donut doesn’t bother me so much anymore, and I would actually quite fancy a Timbit again ;)

Maple syrup
The most famous product of Canada is of course Maple syrup. Coming from the maple tree, this sweet syrup is delicious on pancakes and french toast. So I thought. Now what I didn’t know is that Canadians put maple syrup on everything: not only on bread or cakes, but also on bacon or on a cheese sandwich (or on anything they’ll have for dinner). I was even assured that lentil-soup and maple syrup are a great combination, but I was too much of a coward to try.
Recently we were invited for dinner by JP’s Canadian family, and as a dessert a can of thickened (concentrated) maple syrup was passed on: everyone had a spoon or two (or three) of pure maple syrup! A true heaven for sugar junkies.

Poutine
Don’t worry, not everything is filled with sugar. In fact, this national dish has zero sugar! It is solely filled with saturated fats and salt. Poutine is a dish with french fries, pieces of cheese and a thin gravy sauce on top. This is more my thing! Some die-hard Canadians put maple syrup on top of it as well, which makes it not so sugar-free after all. On the picture you see a ‘baby size’ Poutine, so imagine what the extra large portions look like! 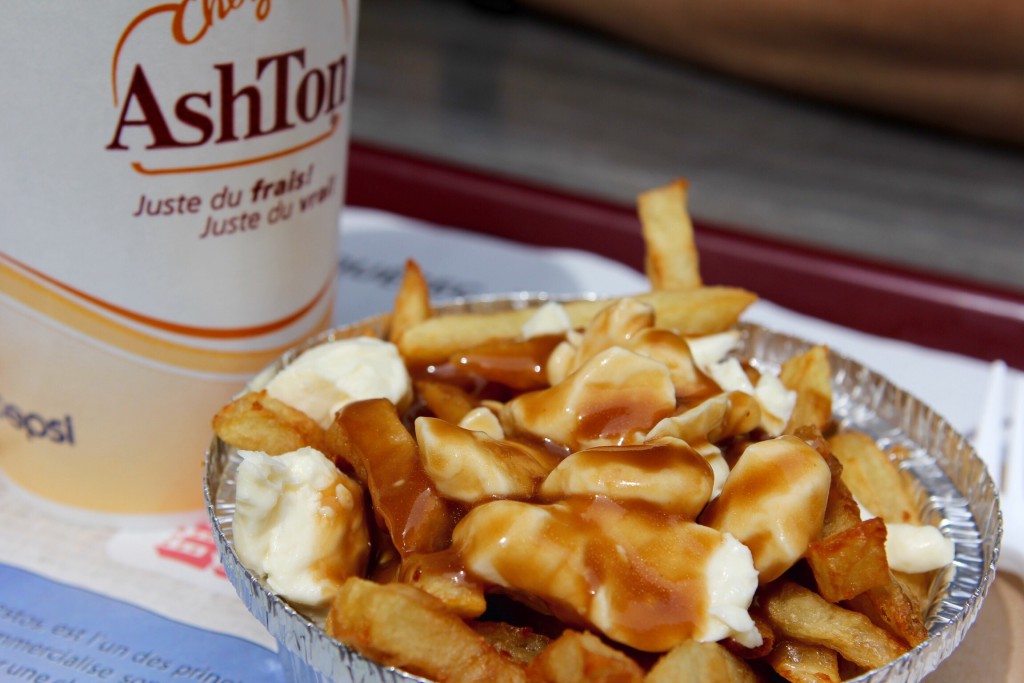